When my Dad and his sister Athena came over from Greece,
this was their passport photo, issued May 27, 1946. 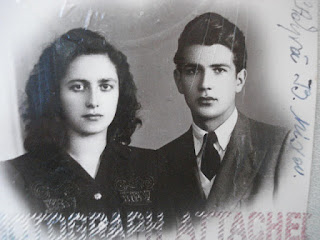 *wolf whistle!
Not sure the actual dates of travel to America via ship. {Dad?}

I believe that this was taken shortly before they left Greece, in Piraeus.
Dad's the third from the right. (looking very much like DF.) 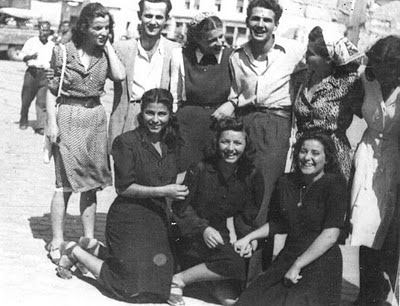 This photo must have taken soon after they arrived to United States. 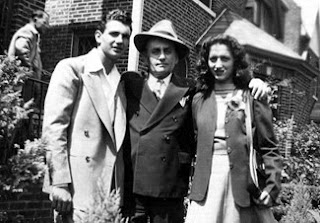 We arrived in New York City on August 21 1946 am. Marine Shark was the name of the ship, it was a US marine transporter, it was decommissioned shortly after and was cut up for scraps, We sailed for 10 days in a festive mood and with great hope for the new world that had too many promises. Plenty of food, good accommodations, great people mostly progressive politically, we published a newpaper while on the ship (which i still have somewhere) and plenty of sea sickness.

In the second photo , JBM, my father's cousin, Christos Alexandris and my sister Athena. Christos Alexandris was a waiter in some exclusive restaurant in NYC and he told us that many of the guests would tip him $10.00, which might equal to $200.00 today. He was a great dancer and a great clarinetist, he used to play in bands with my father. He met his wife Jill at the ballroom dances. New York to me was awesome, I can still remember the beauty of the people, the perfumes, (in the department stores) the beauty of New York City.

**me again: Dad! find that newspaper, i would love to see it!

He came to America from Greece at age 16.
A few years later, he met my Mom.

this will be where I put up snapshots from our life. 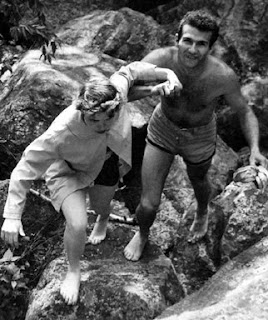